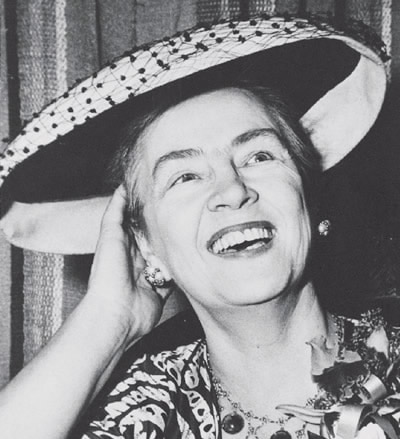 The War Widows’ Guild was founded by Jessie Vasey – a most remarkable woman.

It was she who chose the motto for the Guild. The Guild’s motto exemplifies the spirit of Jessie Vasey. Almost single-handedly she founded a self-help organisation that assisted women widowed through war to come to terms with their loss and sacrifice and to provide for themselves and their children.

Her husband first drew Mrs Vasey’s attention to the plight of war widows. They talked together about how they could do something to help these widows after the end of World War II. But General Vasey died in an air crash on his way to rejoin his troops in New Guinea in March 1945, towards the end of the War. His widow then came to understand and feel even more deeply the desperate situation of women widowed through war.

Although she was a daughter of a Queensland grazier, and a university graduate with first-class honours and two sons, nonetheless after she became a widow she suffered the same despair as every other widow. Through her remarkable and indomitable nature she overcame her despair to become the inspiration that helped heal so many other widows. She gave the rest of her life in pursuit of her vision – to bring war widows together to speak with one voice in the improvement of their circumstances, and to help each other overcome the disadvantage they had suffered.

In 1945 Mrs Vasey established the War Widows’ Guild in Victoria, the following year in New South Wales and thereafter in every Australian State and the Australian Capital Territory. By the time of her death in 1966, the Guild had grown into an influential national lobby group. Today war widows throughout Australia enjoy the outcome of her tenacity. According to the Department of Veterans’ Affairs the number of those eligible to become war widows is now slowly decreasing from a peak in the numbers of war widows which occurred in 2004.

There are many stories told that illustrate the lengths to which Mrs Vasey was prepared to go in the service of “her” widows – from scrubbing the floors to intellectual argument and skilled advocacy.

One story about Mrs Vasey, reported in her biography and the story of the War Widows’ Guild by Mavis Thorpe Clark, No Mean Destiny, provides some insight to the lengths she was prepared to go in promoting the needs of war widows.